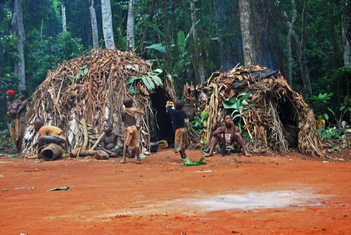 First and foremost, the Baka believe that the rainforest is their "parent" who provides them with food and shelter. This is a huge belief that is reflected in all aspects of the Bakas' lifestyle. Hunting has traditionally been seen as one of the top occupations (If the hunter has skills in slaying forest elephants). There is a three month rainy reason -- during this time the Baka hunters venture into the rainforest for food. The Baka's borrow guns from Bantu-speaking farmers, but only in return for a portion of the game. Most of the time the Baka people are spear hunters and from time to time they will coat their spear heads with poisonous plant extracts.
As for the Baka women, they generally stick with building huts ("mongulus") from branches and leaves, theu make vine baskets and scavenging for edible vegetation and insects. The women also deal with the dam fishing, which is one of the more interesting rainforest occupations. As soon as a dam of branches and sticks is built in a stream, the women will then take the pulp of a vine called "mongombo" into the water. What the pulp does is sends the fish to the surface where the Baka women will then strike them with a machete.
Music is a huge part of the Baka culture. Many of the instruments they have were traded from the Bantu people who live on the edge of the rain forest such as cylindrical drums, arch harp, hard-zither, lammellaphones, flutes, and music bows. They play and sing during rites and healing. Music is a major part of most their lives.

During the male rite of passage, which is restricted to women and children, village elders summon Jengi with drums. It is believed that Jengi kills the boy, who is then reborn as an adult. The purpose of the rite of passage is to show that the young man is strong. It signifies that he is a full fledged adult and has all the rights of one.