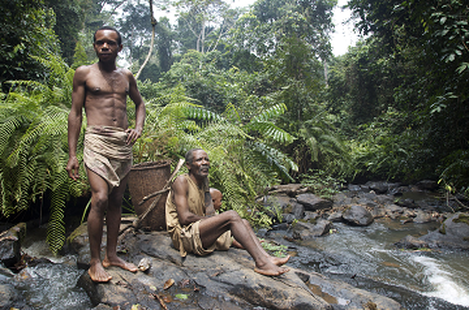 The tribe believes in Animism, so they believe everything has a spirit. The main spirit to the Baka Tribe is the forest spirit known as Jengi or Djengi. The spirit is a parental figure and guardian of the people. This spirit gives them hope and help to society stability. The Baka are highly superstitious emphasising the power of the spirits. However, they rely more on medicinal beliefs and fortune-tellers - bange. They obey and follow without question whatever the bange orders them to do. They believe that a spirit named Komba who created the world and the rain forest. In the Baka religion, spirit rituals are the most important in dealing with the divine. The rituals in a specific Baka tribe belong to someone called “the father of the spirit.” When the fathers of spirits from different tribes meet to transact and share rituals, new and different variations of rituals can be created.
Within the rituals are dancing and singing, as well as other physical actions to honor the forest spirit. Specific rituals cannot be recorded, because the many Baka tribes are constantly exchanging and changing rituals, so that every tribe has unlimited and unpredictable rituals.
There are only a few rituals which are certain. These include The Luma, and The Jengi. The Jengi is a very large and secretive rite of initiation, which celebrates a young man’s passage from adolescence into adulthood. Other initiations include the use of certain oils and other substances. The Luma is a ritual preformed after a successful hunt. This ritual includes drumming and polyphonic singing.
The Baka religious dances and songs are very unique. The Baka instruments include special types of flutes; Pygmy arched harps, water drums, and cylindrical drums. These pygmies sometimes use a vocal technique called Jodel, which is a procession of sound from chest to head voice.
"The Baka religion is what influences their way of life, without it, they would not be in the harmony they have with nature, and would not have the peace and kindness they have with fellow humanity." 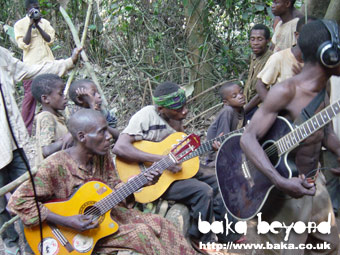